It’s here! We started off New Year’s right by heading out to church. The service was great – they had a contemporary worship band that included a ukulele, which I thought was pretty cool. (Yes, Church of Christers can enjoy instrumental worship. I know, CRAZY. I was wearing shorts, too. =-O)

We tried again unsuccessfully to get to Hapuna Beach (my favorite “beach” beach) but it was crazy full of Hawaiians, so we went to the Mauna Lani again. Not a bad way to spend the New Year!

Got up, watched the Rose Parade and ate cinnamon rolls out of a can. (Not really, but is that not a great image?) It was fun to watch the floats and bands get soaked knowing that after the parade I was headed out to run in the sun and 80-degree weather. My dad and I went to the beach that afternoon and hiked for a while. Some naked guy was there. Gross.

We watched Cinderella Man that night, and I have to say, that movie was not as good as I hoped. You should see the original, Rocky, if you want to see character development and less Renee Zellweger squinting. Seems like Ron Howard could have done a lot more with that cast than he did. And A Beautiful Mind was so good…

(in my best singing voice) What are you doing New Year’s…New Year’s Eve? *cough* Sorry, that was kind of lame. Well, I’m snorkeling. Again. I like it. We also went to Bubba Gumps, and I ate a pound and a half of shrimp. I think that would even gross out seafood lovers. It wasn’t all that it was cracked up to be, I tell you what.

I find New Year’s Eve depressing when I have it with my parents. We didn’t really do anything – just watch the ball drop in Times Square (which is at 7 here) on TV. Then I waited for the LA New Year’s while imagining I was at a fun party with all my friends. *sigh* Hawaii doesn’t have everything.

It’s kind of ridiculous, but I haven’t been able to get a good tan by now. So this morning, I pulled up my metaphorical pants and planned to spend an hour by the pool getting tan – and doggone it, I did. I didn’t even get too burnt. Yay!

We also went to this restaurant that my parents love. It’s in this little country-ish town called Waimea, where I guess one of the largest cattle ranches in the U.S. is. At least that’s what they say – I wouldn’t put it past these Hawaiians to lie – cheeky bastards. Anyways, back to the restaurant. It’s a German restaurant with great food. I had a hefeweizen and a German sausage platter. Mmmm…German sausage. (?)

After that, we headed back to Mauna Lani beach for more snorkeling. (Apparently, I like to snorkel. Who knew?) I got a cool scrape on my ribs fighting to save a small child from a pack of hungry sharks. (That, or I scraped it on a rock trying to catch a small fish. The fish got away. Stupid fish.)

Tomorrow’s New Year’s Eve, and I still haven’t seen Evangeline Lilly. I’m beginning to think she’s trying to avoid me. No, that can’t be it.

I don’t really remember what happened these two days, other than I went snorkeling in the most busy place on the island. I saw more ass than fish. And no, not in a good way.

Well, we got down to Hapuna Beach finally, and guess what? It was CLOSED. [vader] NOOOOOOOOOOOOOO!!!!!! [/vader] I could see why though – the waves were a good 15 to 30 feet high, and up about 100 yards higher than I had ever seen it on the beach before. So instead, we went to my OTHER favorite beach. (Yes, I can have more than one favorite. The term is not mutually exclusive.) The beach is actually the beach in front of one of the really nice hotels around the island, the Mauna Lani. This beach has the best atmosphere, clearest water, and has low crowds to boot. I really enjoy it. It’s kind of a hike to get to but it’s still beautiful. We snorkeled there for about an hour and saw lots of beautiful fish.
One of my parents’ and my favorite ways to spend evenings is play card games. Yes, I am preparing myself for the old folk’s home 50 years early. Always best to be prepared. All in all, a good day.

Once in a great while, Hawaii has rain. You always want this to happen while you’re either asleep or not there. Unfortunately, this is not the case today. Still, there’s something so much better about tropical rain. First, it doesn’t hit you as hard, like it does elsewhere in the world…it’s just light water droplets falling on you gently, a little more than a mist, even though it’s a decent amount of water. It also smells much different – I want to say greener, but that doesn’t really make sense. Oh well. It makes sense to me. What are you, a critic?

Fortunately it wasn’t rainy the whole day, just the afternoon. My dad and I tried to go snorkeling, but unfortunately there was some sort of weird current that really stirred up the water and we couldn’t see much of anything. I have a feeling this had to do with the weather patterns or the place we went. Nevertheless, we did see a few fish. Anytime you see fish, it’s a good outing. At least in my opinion.

Tonight we watched the Aviator with my parents. Great movie, but…it’s slightly uncomfortable watching Leonardo Di Caprio grope Kate Beckinsale’s breast in front of your mom. Ick. It’s a good movie, and the DVD came with a sweet History Channel episode on the life of Howard Hughes. My roommate Ben would be proud (he loves the History Channel).

Tomorrow we get to go to my favorite beach on the island. Huge beach, beautiful sand, crystal clear water for miles. Evangeline Lilly, now’s your time to meet up with me. I’ll be there tomorrow morning at around 10:30 or 11.

Mele Kelikimaka! And so this is Christmas, in Hawaii. Hmm…Yeah, still doesn’t feel like a real Christmas. That’s ok though. I decided to open my day with a Christmas run down the main road to the beach. Unfortunately, in the process I somehow effed up my knee. It’s not too bad though, because I still got to see some goats. Yeah, goats.

After my run we had my favorite Hawaiian breakfast – papaya and Hawaiian toast. If you haven’t gathered yet, Hawaii is all about food. That’s why the people here are all freakin’ huge. I think everything Hawaiian is naturally sugared.

After breakfast we went to the First church established on the Hawaiian islands. It was pretty cool. One of the things I appreciated was the preacher, in his opening prayer, prayed for President Bush. I always think whenever preachers bring politics into the church, it’s dangerous, campy, etc., whether I agree with them or not. However, this was not the case. He did it in a very reverent and non-partisan way. Anyways, I appreciated it. It seems like the good ideal of how the secular world of politics is supposed to be treated by Christians today. But I digress.

So where do you think we went next? That’s right…Big K. Yet another bastion of Christmas spirit. I’m not a particularly big fan of K-mart – in my mind, it’s the “dirty Walmart.” And that’s saying something. But, I guess when you need certain items and it’s the only thing open on Christmas, you take what you can get.

That afternoon I went swimming and swam like eighty miles in 30 minutes. That’s a slight exaggeration, but this journal entry is really boring, so I thought I would spice it up with a little hyperbole. Well…there it is.

Not too bad for Christmas – not great, but definitely different. Hope everyone else had a great one. 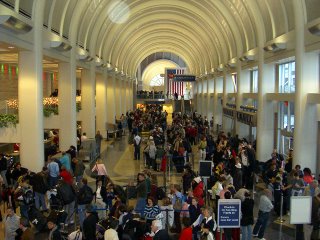 December 24, 2005 – Time to get on the plane for Hawaii! Hooray! Did you know that December 24 is one of the worst days to fly? I didn’t. Yeah, lines for miles. It was crazy. Plus, the Christmas Spirit seems to be stretched to its limit, especially at airports. My dad is really good at this. “We’re NEVER going to make it. These lines are unconscionable.” And so on. As I alternated whistling Christmas tunes and Bobby McFerrin’s “Don’t Worry, Be Happy,” hoping that people would just CHILL OUT, we got to cut in line since our flight was leaving. YAYAYAYAYAYAY!!!!

Once we got on the plane, things were finally looking up (literally). Minus one little problem – Turbulence. No, they didn’t play that awful Lauren Holly/Ray Liotta movie on the plane – it wasn’t that bad. The windy kind. Still, I felt like a water droplet in a skillet the way the plane was bounc

ing around. Oh, has anyone noticed how the seat belt sign has absolutely no relevance anymore? Here we are in the worst turbulence anyone in my family had ever experienced (keep in mind my dad was a small aircraft pilot and my mom used to be a stewardess for Continental) and people are letting their small children walk up and down the halls (and more importantly, bumping my arm). Parents, please control your little bastards. Airplanes are not jungle gyms. I kept hoping that eventually the plane would rip apart, suck the children out and we’d crash into an uncharted island and I’d finally get to make out with Evangeline Lilly. Mmm...Evangeline Lilly. *cough* But seriously, I love kids.

Fortunately (or unfortunately, given the prior scenario), we did manage to get on the ground in one piece. I think it’s a bad sign when everyone applauds when you land. I think it’s okay to take that fact for granted. My $0.02.

One of the best moments for me coming to Hawaii is taking that first step off the plane and taking a big breath of fresh Hawaiian air. There’s something much better about Hawaiian air than other air. Mmm…tropics.

That night we had Hawaiian Baby-Back Ribs. I capitalized every word to tell you how good these things are. Thick meaty ribs cooked in a Polynesian barbeque sauce to perfection…mmm. Good stuff.

It definitely does not feel like Christmas Eve. We had our Christmas Eve celebration last night, but nevertheless it’s still weird. I’m not sure what day it feels like, but Christmas is not it. Nevertheless, I’m still glad I’m in Hawaii. Here’s to a Merry Christmas. <3